If Les Contes de Charles Perrault have been read by a large audience since their publication, the author remains little known. Free man, close to power, Charles Perrault is a witness and an actor of the Grand Siècle.

A man in the service of the King

We have little information about Charles Perrault’s life. He was born on January 12, 1678, in Paris, into a wealthy bourgeois family. The youngest of seven siblings, he attended the ‘Collège de Beauvais’ in Paris where he was always at the top of his class, especially in philosophy. After having an argument with his philosophy professor, he and one of his classmates decided not to return to class. From then on he started studying the classic authors, the history of the church, the history of France and the Bible, on his own. His independent readings brought him to rewrite the Enéide’s sixth volume in burlesque verse. Following the footsteps of his father and elder brother, he studied law and was admitted to the Bar in 1651. He was quickly disillusioned of the job, so in 1654 he moved in with his brother Pierre who was chief tax collector of the City of Paris, thus embarking on a career in government service. It is at this time that he worked with Louis de Breteuil who was Receiver General of Finance for Louis XIV. At the same time, he continued writing poetry.
In 1663, Charles Perrault became the first clerk of Jean-Baptiste Colbert, Finance Minister to King Louis XIV; it was the beginning of a 20 years collaboration. In 1665, he was appointed Controller General in charge of royal buildings, which is equivalent to a minister, and in 1671 he was elected at the ‘Académie Française’ (French Academy).
More specifically in charge of promoting the cultural policy of King Louis XIV, Perrault and Jean Chapelain were at the head of the Royal Propaganda Service; while encouraging and correcting King’s Commendations, he distributed special awards to artists cooperating with the Propaganda Service.
Several Academies had just been founded and Charles Perrault was in charge of giving them Colbert’s instructions; he also wrote mottos celebrating Louis XIV’s victories and accomplishments, and supervised the construction of palaces and monuments celebrating the royal magnificence. Thanks to his connection to Colbert, Charles Perrault was able to get his brother, architect Claude Perrault, appointed as the designer of a new section of the Louvre, the Colonnade. In 1683, a few months before his death, Colbert forced Perrault into retirement after his literary quarrels with Racine, Boileau and most of all, Louvois. 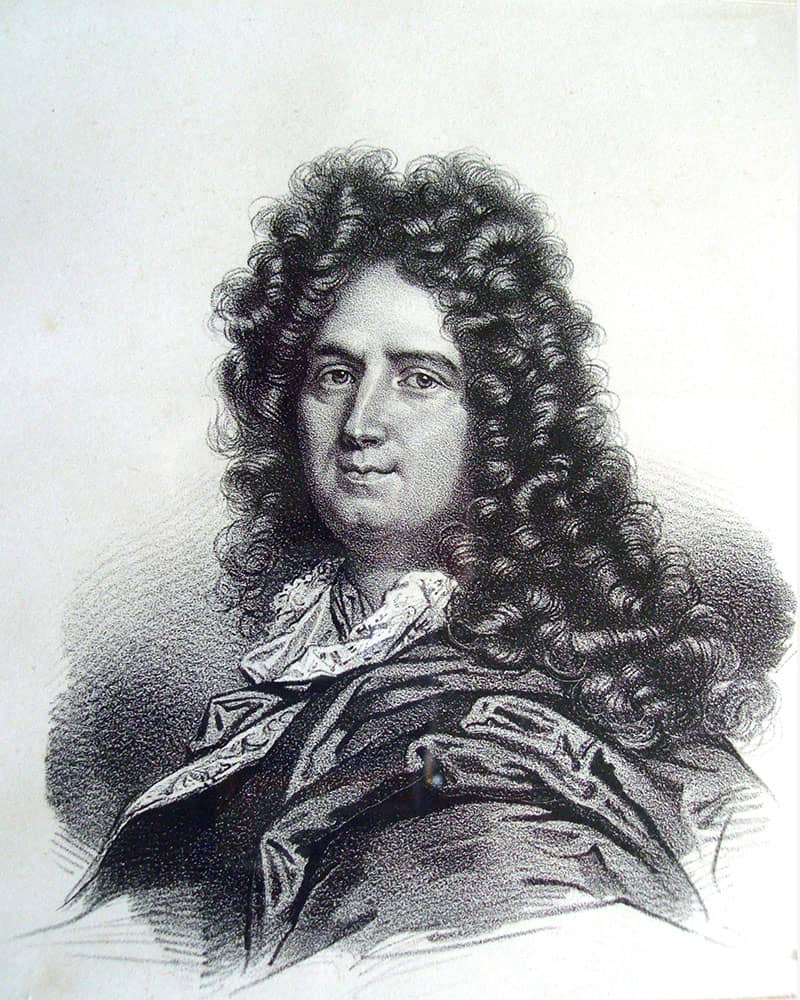 An eclectic man of letters

Charles Perrault is an eclectic man of letters. In 1660, he wrote a love poem, Dialogue de l’amour et de l’amitié (Dialogue between love and friendship) before writing poetry such as Le portrait d’Iris (Iris’s portrait) and Le Siècle de Louis Le Grand (The Age of Louis the Great).
In 1671, Charles Perrault initiated the ‘Quarrel of the Ancients and the Moderns’. This pitted the Ancients, among whom La Fontaine, Boileau and Racine, supporters of the literature of Antiquity and rejecting all deviation from classical art, against supporters of literature from the century of Louis XIV. Charles Perrault was on the side of the Moderns and The Century of Louis the Great, which was read at the French Academy in 1687, scandalized most academicians. He reinforced his position in his 4 volumes of prose titled Parallèle des Anciens et des Modernes (Parallel between Ancients and Moderns, 1688–1698) where he attempted to prove the superiority of the literature of his century. In Le Siècle de Louis le Grand, Perrault argued that because of Louis’s enlightened rule, the present age was superior in every respect to ancient times.
From 1696 to 1701, Charles Perrault wrote another work whose intention was to win the favor of the Court: a collection of biographies entitled Les Hommes illustres qui ont paru en France pendant le XVIIe siècle (illustrious men who have appeared in France during the XVIIth century), a controversial work which helped create the myth of the century of Louis XIV, but also a fascinating insight into life at the time.

The work that Perrault is most remembered by are his Contes de la Mère l’Oye. After leaving his political career, he decided to dedicate himself to his family. Perrault (aged 49) married Marie Guichon (aged 19) in 1672. She gave him 4 children. In 1697 he published Histoires ou Contes du Temps passé (Tales and Stories of the Past with Morals). The volume soon came to be known by its unofficial title Contes de ma mère l’Oye (Tales of Mother Goose), already used in the 1695 manuscript. This title was also featured in the illustrated frontispiece of the printed edition, showing an old woman weaving, telling stories to children. This collection included 8 prose tales, a short story and 2 tales in verse published previously. According to the first edition of the book, its author was Pierre Perrault Darmancour, Charles Perrault’s son. After debating many years, scholars have agreed, however, that the book was written by Charles Perrault alone . The work was written at a time when fairy tales were fashionable amongst aristocrats and bourgeois in Parisian literary salons. The stories were not intended for children because literature for children did not exist in the late XVIIth century. The collection included only one tale written for children: Le Petit chaperon Rouge (Little Red Riding Hood), written as a warning to readers about men preying on young girls walking through the forest, Paris streets and the King’s court. In Perrault’s version, the girl gets into bed with the wolf and is devoured, lacking the happy ending found in all the other Perrault tales. Elaborate embellishments were a preferred style at the French court. The simple plots Perrault started with were modified, the language enhanced and rewritten for an audience of sophisticated aristocratic and noble courtiers. The volume achieved considerable success with eight reprints in Perrault’s lifetime. Charles Perrault had laid the foundations for a new literary genre, the modern fairy tale. Transmitted from generation to generation, the Tales of Mother Goose were widely known but their fame increased in the XIXth century with the rise of romanticism which revived the interest in fairy tales, and with the 1833 Guizot Law on Primary Schools which increased their diffusion greatly.

Shortly after the Tales, Perrault concentrated on the writing of the inconclusive and posthumous Mémoires de ma vie (memories of my life, published in 1757), in giving a portrait of himself and his brothers as top promoters of the cultural splendor of his era. Charles Perrault died in Paris on May 16, 1703, at the age of 75.